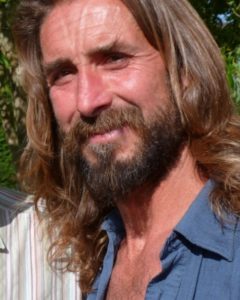 We’ve just hung a second Emmaüs painting. This one was painted by Velasquez when he was just 19 years old. The focus is on the maid-servant; the supper itself is taking place in the background (see the photo below.)

On seeing the painting Denise Levertov (1923–1997) was inspired to write this poem:

She listens, listens, holding
her breath. Surely that voice
is his – the one who had looked at her, once, across the crowd,
as no one ever had looked?
Had seen her? Had spoken as if to her?

Surely those hands were his,
taking the platter of bread from hers just now?
Hands he’d laid on the dying and made them well?

The man they’d crucified for sedition and blasphemy.
The man whose body disappeared from its tomb.
The man it was rumoured now some women had seen this morning, alive?

Those who had brought this stranger home to their table
don’t recognize yet with whom they sit.
But she in the kitchen, absently touching the wine jug she’s to take in,
a young Black servant intently listening,

swings round and sees
the light around him
and is sure.

At its 2017 AGM, the chairman of the (British) Confraternity of St James commented regretfully about the ‘ever-greater emphasis on tourism’ and the increasing commercialization of the Camino. Our little Emmaüs project tries to stand out against that trend. Nevertheless, we should not distinguish between tourists and ‘true’ pilgrims. We believe there is always some deeper interior movement, perhaps not even consciously acknowledged, that draws people to choose to walk this ancient Christian pilgrim route, when they could easily have chosen another path to follow. And all self-identify as ‘pilgrims’. 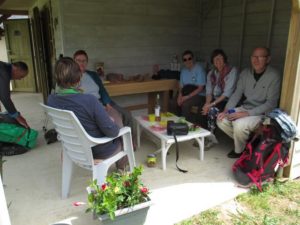 People pursue their pilgrimage in different ways. Some choose to walk the minimum distance to qualify for their Compostella. Many walk a section each year over several years. Some set off from their homes and continue to walk for months at a time. Some are determined to cover 30-35 km a day, others (as this group in our photo) prefer to walk just 13-14 km a day and to enjoy a leisurely lunch. And pilgrims stop at Emmaüs for many different reasons – just over the last few days: to have an early morning coffee, to take lunch in the sunshine, to use the toilet, to pray, to phone home, or even just out of curiosity. 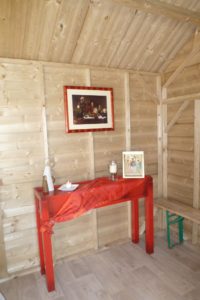 We’ve finally set up the interior of the new shelter. Here are a couple of photos: the chapel corner and the coffee corner – with some happy pilgrim faces on the wall. 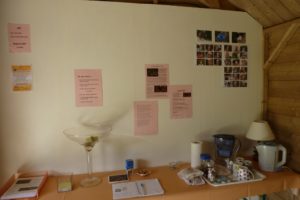 Fumio and Fumiko stopped by today  – our first visitors from Japan. They are walking the Camino in stages; this is their fifth year. 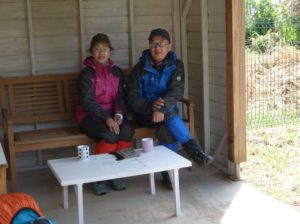 And this is what Fumio  wrote in our visitors book: