Penny and Richard report on their week at Emmaüs:

For us the major excitements of the week were taking the chap with the sprained ankle to Orthez to catch a bus to Bayonne; chatting to a range of pilgrims during the week over coffee; inaugurating the composting system which seems to be working well; and on our last day having a tent full of pilgrims at lunch time because it was so wet and lots of laughter with them. One couple who were a German man and his French wife took a photo ( see below) 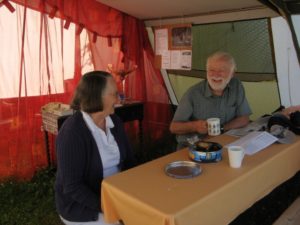 and so did a couple of French ladies who wanted us to pose for the photo with them, they were so taken with the idea … of having their photos on the internet.

The promised photos haven’t yet arrived but in the meantime here is the composting bin being delivered: