We ‘opened’, Emmaüs, our little pilgrim centre on the Camino in Arthez de Béarn, at the beginning of May. ‘Opening’ consisted of setting up the large tent in the front garden, creating a small ‘chapel’

or prayer space at the back of the tent and a sort of coffee bar at the front. We also offer passing pilgrims the opportunity to write a prayer ‘intention’ on a small piece of paper, leave it in a large glass bowl and then take that of another pilgrim to pray with as they walk along

Publicity so far consists of leaflets about Emmaüs in the three churches further back along the Camino that happen to fall within the parish boundaries – Castillon, Caubin and Arthez itself – and various notices in the two pilgrim hostels in the village and at the front gate.

The only fixed point in the day has been a short Morning Prayer service (for which we have texts in both French and English) at 8.30 each morning. And while it has felt good for those of us in the house to start our day by praying together, this has not yet drawn in many passing pilgrims. At this time of day they seem to be rather too focused on getting on with their day’s journey and are not ready yet to interrupt it.

So much for the practical stuff. There has been, as expected, a steady stream of pilgrims passing the front gate – mostly French, followed by Germans, Austrians and Swiss, and then some other nationalities such as Australians, Canadians and South Koreans. However, the number who stop varies enormously from one day to the next – quite often no-one at all, while on one particular day I lost count at twenty four.

Here’s a photo of one busy day when we got into a discussion about the Big Bang and the origins of the Universe. 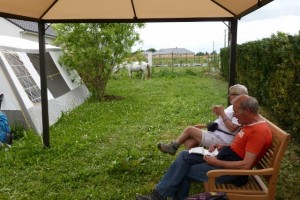 his own lunch on the bench

Donkey and owner – both enjoying lunch