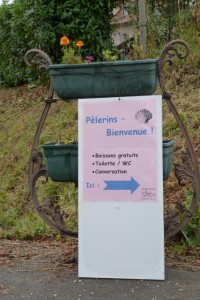 A few days ago we put out a new sign at the front gate. Certainly we’ve had a few more visitors since then. Perhaps the word ‘gratuits’ has helped!

Today a  distressed pilgrim arrived just before our 8.30 morning prayer. We sat together for a while – mostly in silence. Then a lady turned up (sent by the Holy Spirit?) who slowly drew him out of himself. At that point it just felt better to get out of the way. They eventually talked for more than an hour with, it seems, much weeping. She then sent him on his way with a big hug and rather happier than he had been on his arrival. Sometimes it’s better just to stand back …..

Later we went to Lourdes, about an hour and a quarter away, and took the waters – a different sort of pilgrimage!

Today, 25th of July, is the feast-day of St James. Many pilgrims aim to arrive in Santiago de Compostela for this day. Perhaps that is why so many more pilgrims passed by here in May, than we are seeing now. Those arriving in Santiago  today will be celebrating both their arrival as well as the feast of Saint James, who is believed to buried there and after whom the Spanish town is named.

This corner of South West France shares a passion for bull-fighting with its Spanish neighbour and many such spectacles are taking place these days. There may indeed be a connection between the courageous facing of raging bulls, so dear to this part of the world, and the feast of St James. One of the medieval legends of Saint James tells of the miraculous taming of wild bulls. In The Golden Legend we read:

And then they made the sign of the cross upon the bulls, and anon they were meek as lambs. Then they took them and yoked them to the chariot, and took the body of S. James with the stone that they had laid it on, and laid on the chariot, and the wild bulls without governing or driving of anybody drew it forth.

So last night we went to the nearby town of

Orthez, which also lies on the Way to Santiago – the Camino Lemovicensis – to join in the local taurine celebration as spectators of the Course landaise. However, the Course landaise may be better described as bull-teasing rather than bull-fighting: while the band plays, the animals charge towards the ecateurs, who twist away at the last second from its horns, and the sauters, who dive, leap or sommersault over the charging animals. These young people demonstrate great courage and agility without any spilling of blood.

If you have not yet made it to Santiago for his feast-day, and are still on the Way, we invite you to stop by for refreshment and rest and to celebrate St James. Bon Camino.

George stopped yesterday for an hour or so. He was trying to make his pilgrimage without any money, relying on the generosity of people he encountered along the way. His intention was a kind of practical witness against the way modern society had become so dependent on money. He had in fact succeded all the way from Le Puy-en-Velay, until he arrived in Athez where a trip to a cash machine proved necessary. He had lost his cap and and felt that under the searing heat of the sun he had to buy a new one. Needless to say, we made him sandwiches to take on his way!

After a short break, we reopened again in the afternoon of Monday 13 July. This morning, Bastille Day, two ladies joined us for morning prayer at 8.30.  And a couple of others have stopped by during the day.

The weather is still very hot, over 30 degrees, and the village exceptionally quiet. But then our neighbour reminded us that, not only is it a holiday, but that the Tour de France was passing today within about fifteen kilometres from here. Everyone has gone to watch. We should have gone too, since Chris Frome is wearing the Yellow Jersey today.