The old tent is now leaking. We plan to replace it for next season with a wooden cabin. The first job is to prepare a concrete base and lay pipes for water and drainage – see the photos below. 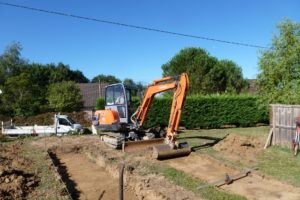 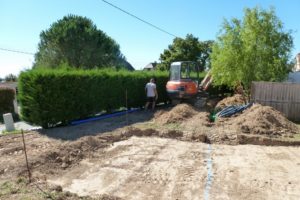 In the meantime the weather has been very hot and we have hardly seen any pilgrims at all. However two ladies stopped today for Morning Prayer- with the noise of the digger at work outside the tent!

The Camino is fairly quiet at the moment, but Clare writes about some rather special visitors who stopped by during her stay:

12 August:  When I first looked over at the tent I saw a woman and a teenage girl.  However, soon afterwards several other people arrived and I eventually realised that they were a couple with their seven children, ranging in age from mid-teens to an infant who was being carried.  They came from the north of France and were a most delightful and very friendly family, clearly very happy together and all helping to get their snacks unpacked and sorted out.  In conversation I learned that the couple have been doing the Camino each year in stages, and that their most recent walking session had taken place at Easter time last year, when the mother had been several months pregnant with their youngest child!  In fact, the two youngest ones were still having to be carried in specially adapted rucksacks!  After a most enjoyable conversation they eventually began to pack up their things, and then, when they were ready to set off, they invited me to pray with them – quite a reversal of our usual role here!  I gladly accepted and discovered that they regularly pray together and that they had a little booklet containing prayers for pilgrims.  They take it in turn to lead the prayers, and today it was the turn of one of the daughters, aged around 10 or 11.  I found this to be a most moving and inspiring experience, and I felt very privileged to have shared with them.  Three of the daughters wrote in our visitors’ book, indicating that the family had greatly appreciated their visit.

13 August:  Another group of 7 arrived today, two of whom were registered blind.  I was very struck by the way in which the other members of the group cared for the two blind members, both of whom were clearly enjoying and appreciating their pilgrimage.  It turned out that one member of the group has particular expertise in working with blind people, and he regularly organises walking expeditions which include blind members.    Once again, I was left feeling that I had been very privileged to have spent time with this group.

16 August:  Two women – one North American and one Irish – came in for a brief visit, and, after looking around inside the tent, they came over and told me that they were delighted to find this place in which there is a clear sign of the spiritual aspect of the pilgrimage to Santiago, as they had been feeling that this aspect had been missing from several of the other places where they had stopped.

Unfortunately no one was here when Bernard and Jocelyn came by today. But they left a very gracious message as follows:

Nine pilgrims, two French families, stopped for morning prayer this morning. They were all wearing green T-shirts, which colour I was told is a symbol of espérance (hope).  This was their last day before returning home. Here they are – or at least eight of them: 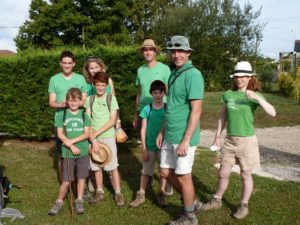 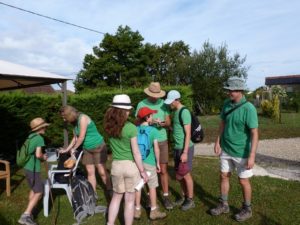 In the afternoon two ladies from Austria, also on their last day, stopped for a drink: