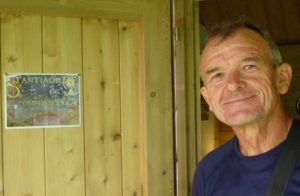 I came out of the house about 10.00 am this morning to find Robert sitting quietly in our little chapel praying to Saint James, whose feast it is today. Robert is, so far as I know, our first pilgrim visitor from Poland. He is walking the Camino in stages, having set out from home four years ago. This year he’d started about 150 km north of Le Puy. He paid us the compliment of saying that all along the way he’d not seen anywhere else like our Emmaüs – by which I think he meant a little chapel that wasn’t part of a church. As he left he encountered his pilgrim friend Bernard, who then also decided to take a coffee. 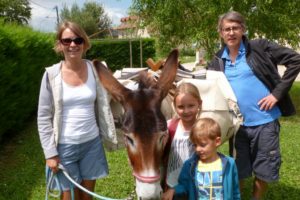 Later a family of four, together with La Bohème, their donkey, stopped by for their lunch. Soon afterwards Damien joined them also for his lunch. And an hour later Marc and Cedric from Belgium stopped for a short while.

So Saint James  has brought us lots of interesting encounters on this his feast day!