There have been rather few pilgrims these last few weeks. We’ve been wondering why.  Jacques (no photo), a much travelled pilgrim who had walked to Jerusalem and Rome and had been to Santiago de Compostella on several previous occasions, thought the fall off of pilgrims this year had something to do with the growing secularisation of French society. But perhaps the hot weather is also partly responsible….. 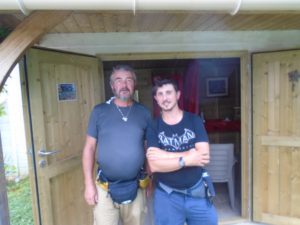 Hot weather had not put off Yves and Guillaume – two pilgrims who did come by. We don’t remember meeting a father and son walking together before.