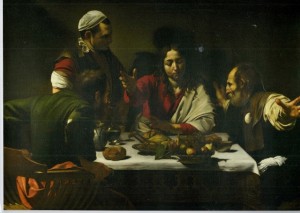 This painting by Caravaggio, dated 1610, of the dinner at Emmaus is in the National Gallery in London. We have chosen it as the ‘symbol’ of our little centre – Emmaüs (spelt the French way).

The Emmaus story is to be found in Luke (24: 13-35). It is one of the best loved stories of Christ’s appearances after His Resurrection. Two disciples, one of whom is name as Cleopas are walking, downhill, to the village of Emmaus which is perhaps ten km from Jerusalem. They are thoroughly desolate having seen Jesus, in whom they’d vested their hopes, crucified by the authorities. Along comes a stranger who seems to know nothing of these events, but when they tell him, he explains to them how all these things were anticipated in the Scriptures. When they reach Emmaus it is getting dark. The stranger seems to want to go on but they invite him to stay and dine with them. At table the stranger blesses and breaks bread and suddenly they realise that he is the risen Christ (of whom they’d already heard some strange stories that morning from the women who went to the tomb). Christ disappears, but they immediately get up from the table and walk back, uphill, to Jerusalem to tell the other disciples of their experience.

A number of aspects of this story strike me. Arriving at Emmaus, the stranger makes to go on. I see this as a metaphor for God’s courtesy, as Julian of Norwich emphasizes. God does not impose; He/She waits to be invited into our life.

I like to think of the disciples as Cleopas and his wife Mary, whom John (19: 25) tells us was one of the women at the foot of the Cross. In this picture, however, Caravaggio, imagines the other disciple to be St James. We can see this because He is wearing a shell – St James’ symbol. This is very resonant; the two disciples are walkers, if not pilgrims, and Emmaus is a place to pause on their journey. Hence the title – Emmaüs – of our little centre d’acceuil.

Notice that in Caravaggio’s painting Jesus, unusually, is clean shaven. In fact His face is quite androgynous. The risen Christ is not gendered.

There’s a second Caravaggio of the dinner at Emmaus in the Pinacoteca di Brera in Milan. That one was painted four years earlier, is more conventional and I think not as interesting.

Below is another painting of the dinner at Emmaus, this one by Velasquez, together with a poem by Denis Levertov reflecting on the painting:

She listens, listens, holding
her breath. Surely that voice
is his – the one
who had looked at her, once, across the crowd,
as no one had ever looked?
Had seen her? Had spoken as if to her?

Surely those hands were his, taking the platter of bread from hers just now?
Hands he’d laid on the dying and made them well?

The man they’ crucified for sedition and blasphemy.
The man whose body disappeared from its tomb.
The man it was rumoured now some women had seen this morning, alive?

Those who had brought this stranger home to their table
don’t recognize yet with whom they sit.
But she in the kitchen, absently touching the wine jug she’s to take in, a young Black servant intently listening, swings round and sees
the light around him and is sure.