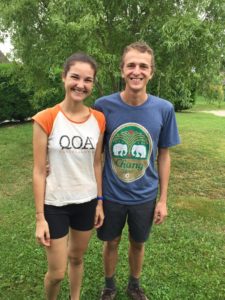 exception. I was just getting up when two young pilgrims knocked on the door asking if they could indeed have coffee and use the wifi and the toilet. Ombeline and Simon had camped the previous night in Arthez – in a shelter from the large storm. So of course I welcomed them and after coffee they joined me in Morning Prayer, concluding with a sung Benedictus. They had been walking for a few weeks and hoped to reach Santiago. 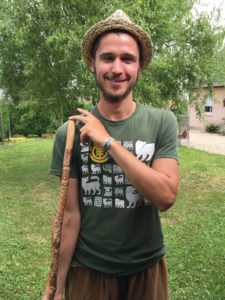 An hour later Dominik stopped by. He asked for coffee and after a brief consideration of the options we agreed that a proper cafetière was the best. He came from Basle and walked with a beautiful stick which he’d carved himself (Click on the photo to see the shell and other lovely decorations.) Dominik was wondering about what to do next in life – possibly something hospitable to do with food – though we agreed it might well be something different by the time he’d reached Santiago. 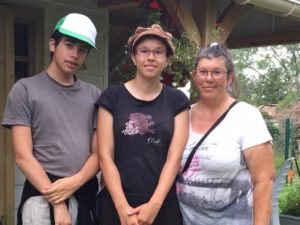 We were still in conversation when Pauline arrived with her youngest aughter and a teenage grandson. She felt there had been many blessings in her life as well as difficulties and was keen to share her faith with others. They are walking in stages year by year as many pilgrims do.

And finally around lunch time Louis and Guillaume stopped for yet another coffee. Guillame’s elegant baton, topped with feathers, had been given to him by Dominik so he was pleased to hear his friend was only a few kilometres ahead.

Despite this increase in numbers today, all of the visitors concurred that there are few pilgrims on the road this year. Louis suggested that the fluctuations in daily numbers may be because those who start part way tend to do so at the one of the grand étapes and often at a weekend, so will reach Arthez together. Whatever the reason it is a blessing that several of them stop in Emmaus to refresh themselves.